Once cracks and failed joints start to appear they can worsen quickly in particular if there is a lot of freezing weather. Once water gets into the cracks they will suffer from the natural expansion of freezing water and small cracks can quite quickly increase in size. 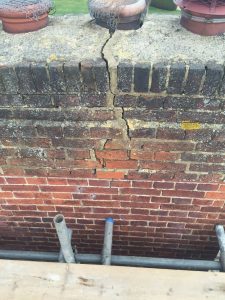 The areas that weather the most are the flaunching on the top of the stack and the pointing in the brickwork. The flaunching serves two purposes, to hold the chimney pots in place and to encourage rainwater away from the stack. It is set at a steep pitch to encourage this process. In time, the flaunching can crack around the chimney pot and also where it meets the brickwork. Where there are problems caused by failed flaunching it is best to remove it all and replace either with grit and cement or a lime based mortar. The pots can be carefully re-seated and if there is a liner in place the top section can be checked.

The pointing in the brick work will fail over time and if neglected some of the bricks can spoil and need replacing. It is better to act quickly and it might be enough to spot point troublesome areas otherwise we prefer to rake out all the joints before carefully re-pointing to ensure a consistent appearance.

With the stack repointed and reflaunched its ability to resist the weather will be as good as it was when it was originally built. However, this process will not make the bricks impervious and without a lead tray, as in many older buildings, water may still percolate through the porous brickwork and into the interior chimney breast. If the chimney stack cannot be taken down and rebuilt to include lead trays and associated lead work the stack can be treated with a silicon water repellent which is a temporary treatment but can last for a few years.

With the case study we illustrate here the top of the stack has deteriorated quite badly, so much so that a crack has developed in the top few courses. The flaunching has also started to disappear around the edges and a lot of the pointing has fallen out.

There was no need for an in depth discussion with this client, they could see that a partial rebuild was necessary and the top eight courses were removed and replaced. You may notice that we did not use a soldier course of bricks for the top because we find that this is not as robust as a flat laid course. The replaced section of brick work includes the original drip that encourages water to drop off a brick overhand rather than run down the outside of the stack. 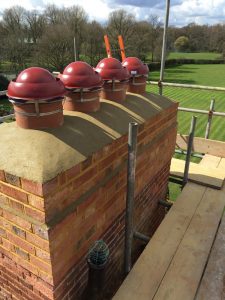 For all chimney repairs of this nature it is likely that scaffolding will be needed and a provision should be made for this. 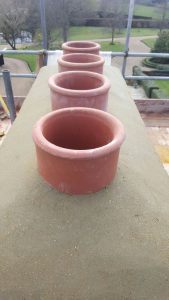 Repaired chimney stack with 8 courses of brickwork replaced and new weather flaunching. The pots are fitted with mini Eurocowls to keep out rain and stop birds nesting in the flues.

Notice the creation of a “drip” by laying a few courses to a wider dimension before reducing and creating an overhang so that water will drip off this rather than be absorbed by the pervious brickwork. Notice also the removal of the soldier course (bricks laid on end rather than flat) to make the stack more robust.