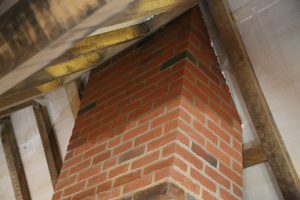 Every winter we were inundated with calls enquiring about the cause of damp staining in chimney breasts and adjacent areas.

Chimney stacks are designed to be exposed to the weather more than any other part of the building. This allows all the smoke and fumes to disperse into the atmosphere and away from living areas. Because of that exposure chimney stacks receive a great deal of weather and in the context of this article that means rain. Bricks are pervious and can act like sponges in absorbing large amounts of moisture. This moisture is then likely to track down the chimney stack and into the chimney breast unless there is an impermeable membrane to prevent it.

In modern buildings at least one lead tray is incorporated into the chimney stack where it breaks through the roof. Generally two lead trays are installed so that there is no unprotected area of the stack. As the rain percolates down the exposed section of the chimney stack it will meet the lead tray. The lead tray is dressed across the whole surface area of the chimney stack in one piece. Where it covers each flue the lead is then dressed up around the inside edge of the flue and a small gully is formed. Any rain that runs down the inside of the flue is then picked up by the lead along with any rain absorbed by the stack and this is then ejected through weep holes. 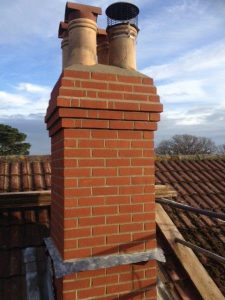 The lead tray works in conjunction with associated lead work. Step flashings protect the sides of the chimney stack from water running down the roof and front aprons and back gutters perform similar roles. The step flashings are installed together with soakers – lead work that sits under the tiles next to the chimney stack to form a second line of defence. When correctly installed, importantly at the correct height, this lead will ensure that no rain can penetrate into the interior of the building.

When we receive an enquiry relating to damp in the chimney breast we ask the following two questions.

How old is the house? 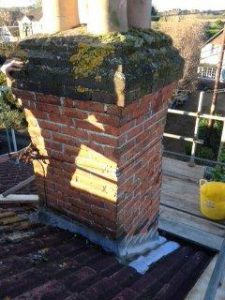 In older buildings a slate tray is sometimes incorporated within the chimney structure and these can work well though there will be no internal gulley within the flue to catch water running down the inside . Lead trays became common place in the 1950s and buildings constructed after that time can usually be relied on to have the correct lead work. However, it is important that the lead work has not been compromised during sweeping or the introduction of a flexible or other liner. Chimney fires can also burn off the upturned lead.

Where is the damp showing inside the building?

It may that the damp is showing on one side only of the chimney breast and this may be a failing in the flashings but until the flashings are closely inspected, renewed or adjusted it will not be clear if this is the only source of damp. In older buildings a certain amount of damp was acceptable within an uninhabited loft and with older un-modernised buildings there would be more drafts to help the air circulate. Nowadays a loft is often turned into a living space and the chimney breast will need to be dry. Depending on the configuration of the stack and where it breaks through the roof the lead tray may be visible within the loft though of course it can be disguised in various ways. 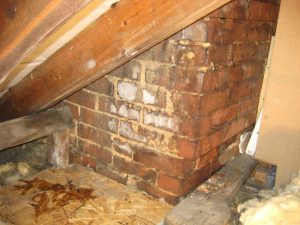 Where the building is more recently built and damp problems are occurring it may be that something has affected the lead tray. There are a number of reasons that can cause this. We referred above to the importance of the lead tray being turned up inside the flue and if something has happened to this gulley then the whole of the lead tray can be compromised. This can be the result of over vigorous sweeping so that on removing the brush an edge of the lead gulley has been caught and the lead tray, instead of expelling the water now funnels the water down the flue.

We can sometimes access the flue by removing one or two bricks and re-adjusting the lead work.

Another cause of damage can occur with the installation of various forms of flue lining. Flexible liners are usually inserted through the top of the flue and then dragged down to connect just above the fire recess. If insufficient care is taken during the installation it can have contact with the lead tray and re-adjusting it. Some cast in situ systems will bridge the lead tray granting any moisture a route past the tray. In a world of unlimited resources a newly built or rebuilt chimney will include a factory made liner that can be cut at a suitable height to be then fully incorporated into the lead tray. 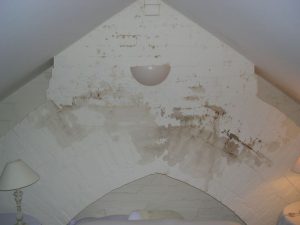 If you are starting to get a bit of damp in your property there are some actions that you may consider undertaking yourself. In particular if a lead tray is present ensure that the weep holes are kept clear. If they are not the internal gulley simply becomes an internal reservoir and as additional rainwater gathers this will overflow into the flue and the positive benefit of the tray lost.

Keep an eye on the condition of the stack – do not let a small amount of deterioration go unattended. Re-flaunching the top of the stack will keep rainwater running away from the more vulnerable areas of the structure and reduce the effect of the frost on any cracks starting to appear. Keep an eye on the chimney pots they are the first line of defence and together with a suitable cowl will keep out most of the weather. If you have unused flues make sure that they are fitted with a vent cap jointed in and that unused fireplaces are vented as well.

There are other treatments available to reduce the problem of damp with in a chimney breast but these are generally not long lasting. There are silicone treatments that make the chimney brickwork more weather resistant but these need re-applying every few years. Where there is no choice we do apply them and where a chimney breast is on an exposed outside wall and built without the benefit of a cavity the application of breathable sealants is one of the few options available. 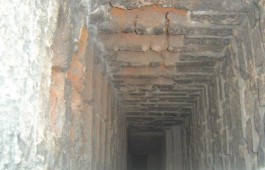 We carry out full chimney and flue surveys using state-of-the-art closed-circuit television (CCTV) camera equipment, to identify and address problems within the chimney 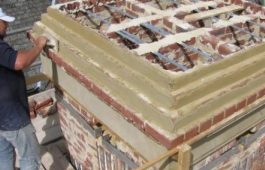 If your chimney is damaged or is showing signs of age it may become unusable or dangerous. Speak to our experts about our comprehensive chimney repair and restoration services.

View Chimney Repairs
Get in Touch

If you have a question about damp chimney breast, just enter your details below stating how you'd like to be contacted and we'll be in touch as soon as we can.