Home > About Us > Tony Billing

Tony comes from a farming background. Born in Somerset on a dairy farm his family moved to Hampshire when he was just a boy. From an early age he worked with his father and developed an interest in all things agricultural. This led to employment by the Forestry Commission where he learnt much about growing timber for construction and fuel. As many young men with his knowledge of heavy machinery Tony took employment with civil engineering and other construction industry companies. Tony decided to start out on his own. Small scale contracts were followed by larger ones – both new build and refurbishments of older properties. Still in his twenties, and by chance, Tony fell into conversation on one of his sites with the Isokern people and thus the first steps into chimney specialism began. 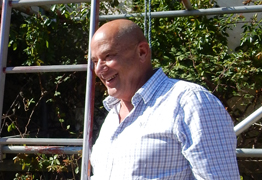 With the support of Isokern Tony started lining chimneys for wood burners and open fires. To this day Isokern, now Schiedel Isokern owned by the Monier Group, remain the company’s preferred supplier of flue lining systems because of the durability, longevity and excellent insulation value of the product.

Over the years, as his reputation spread, larger and more challenging projects were undertaken. Locally, there are many conservation sensitive and Grade 1 and 2 listed substantial houses that have fallen into disrepair and, on being sold, fresh enthusiasm and funds become available. These buildings are being restored to their former glory and solid fuel fireplaces and, in particular wood burning stoves and open fires in keeping with original designs, were requested. Modern building regulations have increased the safety and environmental standards demanded and so the original design of the fireplace and flues may not be compatible with these regulations.

Tony has developed methods to address these conflicts with great success. With his experience comes an intuition that sits alongside the science of flues and fireplaces so that his appraisal of the building itself and how the flues and fireplaces will operate within that building is unlikely to be surpassed. His hands on experience as a builder and his continued interest in architecture and construction brings a holistic approach to the design and construction of chimneys and flues. These are not looked at as a separate part of the building but part of the whole structure and worthy of early consideration in any design project.

Developing a reputation as the “go to” person for chimney work in a rural environment brought Tony onto many large scale country house renovations and this developed further his expertise in being able to appraise the potential of each fireplace and flue and then to structure a plan to deliver the clients’ requirements as closely as possible or to discuss with architects, conservation officers and others the means of achieving that objective.

The experience within the countryside has been used to advantage in urban environments as well and with such extensive experience we receive many enquiries and proposals from London and other cities.

Tony’s one bugbear is that too often the needs of fireplaces and flues have been left too late in the design and construction process and even in the most expensive houses locally and in London mistakes are made, mistakes that are costly to remedy  and can require a compromise solution. As Tony has commented, “Nowhere in a renovated or newly built family home draws people together or improves the humour of those present than a delightful fireplace alive with flames and warmth. The design and construction of such a centrepiece should not be an afterthought but given at least as much early consideration as all the other services being installed.”

Tony is now approaching his 40th year in chimney construction and design and whilst the company continues to thrive under his control he focuses his own time increasingly on the consultancy and advice side of the company though remains always on hand for the benefit of the company as a whole.