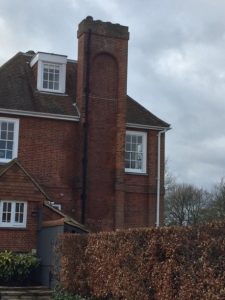 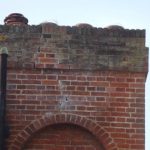 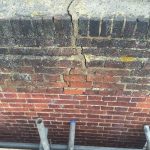 Images showing the large crack to the top of the chimney stack and the defective weather flaunching.

Billing Chimneys advised that the best course of action, due to sensitivities with the building, would be to carefully take down the chimney stack to just below the brick corbel and then rebuild the chimney to its existing dimensions and configuration in new brickwork and traditional materials. The crack seen below the corbel was to be treated by raking out the existing mortar and installing Heli-bars, fixed with a two part epoxy resin to secure the brickwork. New lime mortar would then be used to repoint the brickwork as required.

New chimney pots would be installed upon the chimney, held in position with new weather flaunching set at a steep pitch to shed water. Stainless steel terracotta euro-cowls would then be fixed to the pots to prevent birds from nesting and prevent rain from entering the flue ways.

The proposals were accepted by both the client and the relevant conservation authorities as the best method of carrying out the necessary restorative work whilst minimising the impact on the structure. The works were duly undertaken, resulting in a structurally sound chimney stack with the risk of damp penetration minimised.