At Billing Chimneys our first concern is to ensure that chimneys are safe to use. Our teams of qualified engineers have a broad experience of issues that affect domestic and commercial chimneys. This article focuses on our state-of-the-art, closed-circuit television (CCTV), chimney inspection and survey service, where we use cameras to inspect chimney flues and flue liners throughout their height.

Why inspect with a chimney camera?

By their very nature flues are hidden. On initial survey our experienced surveyors can explain a lot of the likely problems that may be present, however, using a CCTV camera give us the best view possible of the condition of the inside of the chimney without opening up access holes. The camera is carefully passed through the full height of the flue, ideally from the top. Configuration and condition can be assessed as well as dimensions.

There are many examples of kinds of damage to chimneys and flues that simply cannot be seen without a camera. From time to time we discover that a flue has been encroached upon perhaps to create a cupboard; on occasions the chimney breast has been used to provide support and a timber joist has been lodged in the brickwork. Thanks to the modern camera technology, it’s possible to get a good look at the condition inside any chimney or flue liner and spot these potential problems.

While we can appreciate that an initial upfront cost will be incurred, the camera survey will generally tell us everything we need to know and avoids assumptions.

Tim Goulding, Chief CCTV Engineer at Billing Chimneys said: ‘The cameras we use are compact and robust. The camera itself is miniature CCTV camera with powerful LED lights. This is mounted on a flexible cable then fed through the chimney ideally from the top of the flue. With the camera comes a dedicated monitor with a record option. The images are transferred to a laptop computer if required to be kept as a record or can simply be viewed and reviewed on site with the client.’

What our chimney inspections look for

Even if your fire or stove is working well and your chimney or flue appears to be in good condition, it is still best to have the chimney cleaned and checked annually.  The problems a CCTV survey could discover include mortar joints and brickwork breaking down within the flue, leading to the potential of smoke and fumes leaking into adjacent rooms and an increased risk of a fire occurring through heat transfer, damage to existing flue linings which may be allowing smoke and fumes to escape and blockages caused by tar build-up or debris, such as bird nests. All of these issues are potentially dangerous.

There are other practical reasons for having a survey. These include whether a new flue lining is necessary, checking the condition of a flue after a chimney fire has occurred, for insurance purposes and for new home owners / tenants to ensure the existing flues are safe to be used in their current condition.

Where blockages are suspected we can include a sonic finder in the survey to identify precisely where the blockage is and if necessary open up the flue at the precise point to access and remove the debris. Few people who have not encountered long term birdnesting in flues would believe the volume and the solid set achieved by this activity.

In older, conservation sensitive and larger houses where the use the flues will be put to is being reviewed, the survey can enable a plan of the flue system to be made and the options discussed. Often there is a request for large open fires and the CCTV chimney survey can enable decisions to be made so that this can be achieved. 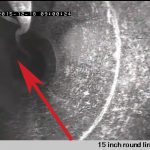 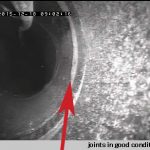 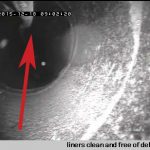 These images show the 15” round liners, that the liners are clear and free of debris and that they are in good condition. 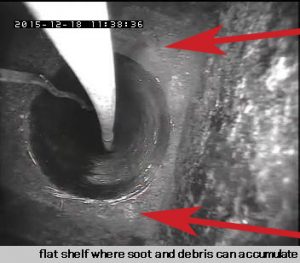 This image shows that where the flexible liner terminates approximately 3m from the top of the chimney there is a flat shelf. If left unattended, soot and debris can accumulate and greatly increase the risk of a chimney fire occurring. 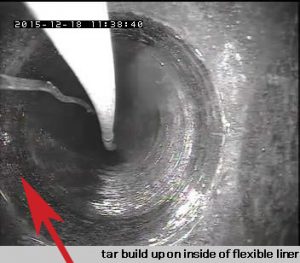 These three images highlight that there is a significant build-up of tar on the inside of the flexible liner. This cannot be removed through sweeping and poses an increased risk of a chimney fire occurring. 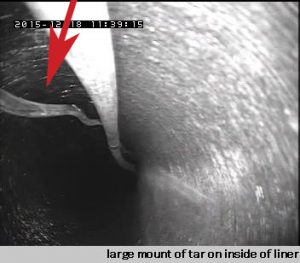 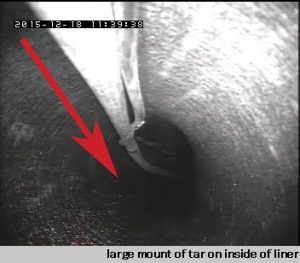 This example showed the flexible liner to have large deposits of soot and tar within the flue that could not be removed through sweeping. This had built up due to poor maintenance of the flue by previous owners and as such, our suggestion was for a new flexible liner to be installed, to ensure that the risk of a fire occurring was greatly reduced.

These images show that some of the brickwork and mortar joints are breaking down. If left unattended there is an increased risk of the flue leaking smoke and fumes and even a fire occurring due to heat transfer into adjacent structures. 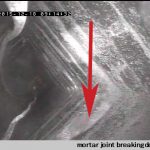 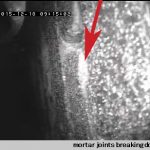 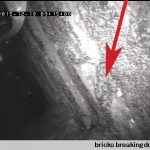 This example showed that the existing brick flue had both the mortar joints and the brick faces breaking down within. If these were left unattended and the existing fire was to be continued to be used, the risk of smoke and flues leaking into adjacent structures and the risk of a fire occurring through heat transfer is greatly increased.

We therefore suggested that the existing flue way was lined with the appropriate sized liners to meet the intended use, to ensure a suitable flue way was provided.

The images show the bird nesting material that was blocking the flue, the debris at the fireplace as it was removed and the flue swept and clear of debris once complete. This flue does not need to be accessed to clear any blockages. 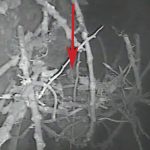 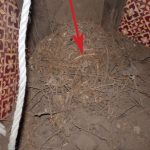 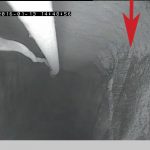 This example shows that a bird’s nest was found to be blocking an existing flue through approximately 4m of its height. The blockage was removed through sweeping via the top of the chimney. Once the blockage was removed, the flue was re-inspected to show it was now clear and free of debris.

How will a CCTV survey benefit me and my home?

Billing Chimneys’ CCTV equipment is state-of-the art providing a great quality picture. The camera rotates a full 360 degrees for a comprehensive inspection of the entire surface. The inspection is recorded and a full written report, including images, will be provided. The report will include any suggested remedial works and the reasons why these should be considered. There are real benefits to a CCTV inspection, it can:

What happens during the survey and how long does it take?

Billing Chimneys’ engineers are diligent in their task and will take the time it needs to ensure a thorough, professional job. Each job is unique, so an estimate of the time it will take will be given when the work is discussed.

Prior to the survey the flue should not have been used for at least 24 hours. The area around the fireplace will need to be cleared to give the engineers space to work. They will also need access to a power point.

The area around the given fire will firstly be protected as best as possible to ensure all dust is kept to a minimum. The chimney will then be swept, to remove any debris or blockages that may inhibit the CCTV inspection.

The CCTV inspection will then take place and the findings presented in a full written report, highlighting any suggested remedial works. An unsealed smoke test will also be undertaken to visibly inspect for any leakages of smoke into adjacent rooms or structures.

If you have a chimney or flue that hasn’t been checked or surveyed recently, then contact Billing Chimneys. Whether you are a householder, landlord or surveyor, our friendly professional engineers will be able to discuss your needs and make an appointment at your convenience.

Give us your feedback
Recent Articles
Ask a Question?